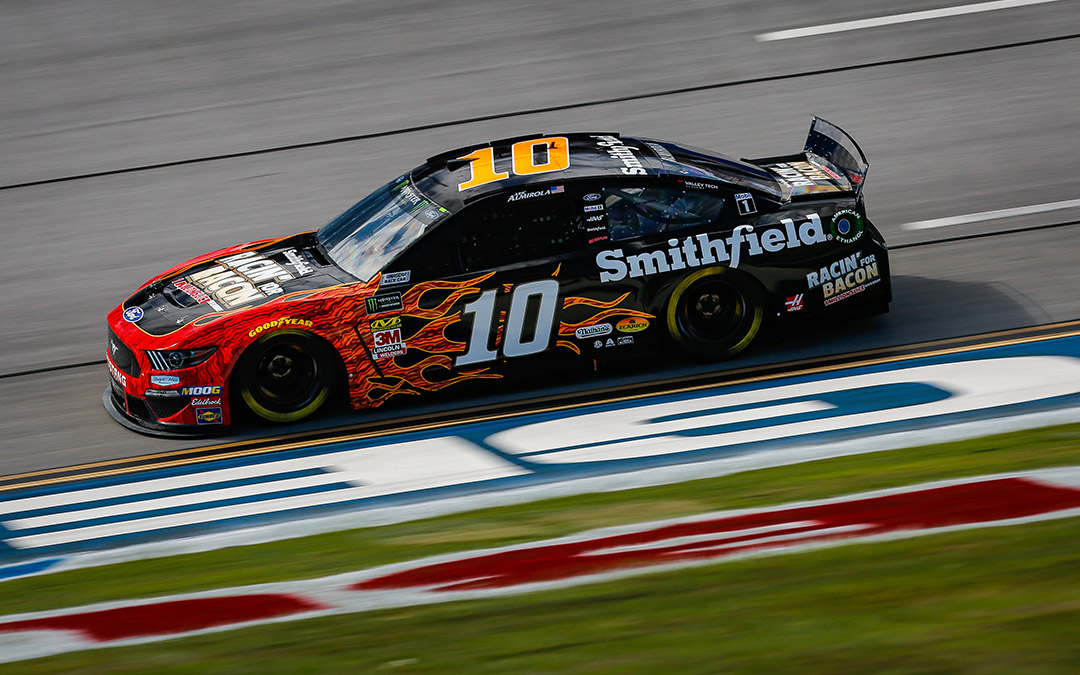 Stage 1 Recap (Laps 1-55):
● Aric Almirola started fifth and finished 20th.
● The Smithfield Racin’ for Bacon Ford driver shuffled through the pack and raced back to 14th by lap 25.
● On lap 36, he pitted for fuel right before the caution was called on lap 37, scored in second place.
● He raced clean in the middle of the pack for the remainder of the stage until inclement weather postponed the race to Monday.

Stage 2 Recap (Laps 56-110):
● Almirola started 20th and finished 13th.
● Almirola found a pack of fellow Ford drivers and rejoined the top-10 by lap 69.
● He pitted under green on lap 94 with teammates for fuel. When he rejoined the field he was the leader of the top row.
● Almirola was shuffled back with no help, but he avoided a multicar accident on lap 108.
● At the conclusion of the stage he pitted for four tires and fuel and gained multiple spots on pit road.

Final Stage Recap (Laps 111-188):
● Almirola started ninth and finished fourth.
● Almirola was scored 11th after a caution on lap 122.
● He pitted the No. 10 Ford Mustang to top off fuel on lap 135 and came off pit road 21st.
● Almirola raced in and around the top-10 by lap 145. He pitted again under caution for fuel on lap 153 and was scored sixth when he returned to the track.
● When racing resumed, Almirola led the top line with help from behind. He raced to second place by pushing the No. 17 car.
● Almirola weaved his way through a multicar wreck on lap 162 with no damage.
● The Smithfield Racin’ for Bacon Ford driver made his way through a spinning and flipping multicar accident on lap 183 without a scratch.
● He restarted in second place and battled with fellow Ford drivers to hold the No. 10 Ford up front. On the last lap, the No. 6 car had a run on the outside, with Almirola pushing the leader to give himself room to make a move. Unfortunatley, he was out of room and brought home a fourth-place finish.

Notes:
● Almirola earned his second top-five of the season and his fourth top-five in 20 career Monster Energy NASCAR Cup Series starts at Talladega.
● This is Almirola’s seventh consecutive top-10 at Talladega. He finished ninth in the series’ previous visit to the track in April.
● This is Almirola’s seventh straight top-20. He finished 17th in the series’ last race at Dover (Del.) International Speedway.
● Almirola led twice for three laps to increase his laps-led total at Talladega to 46.
● Ryan Blaney won the 1000Bulbs.com 500 to score his third career Monster Energy NASCAR Cup Series victory, his first of the season and his first at Talladega. His margin of victory over second-place Ryan Newman was .007 of a second.
● There were nine caution periods for a total of 43 laps.
● Only 20 of the 40 drivers in the 1000Bulbs.com 500 finished on the lead lap.|
● Ford took six of the top-10 finishing positions in the 1000Bulbs.com 500.

Aric Almirola, Driver of the No. 10 Smithfield Racin’ for Bacon Ford Mustang for Stewart-Haas Racing:
“Obviously, when you get that close to the end and you feel like you’re in position, you want to win. Man, it’s hard. It’s hard to make the right move and do the right thing at the right time. It’s so situational. There’s maybe a couple of things I could have tried to get up in front of the No. 6, but he was coming so fast. There was no way I was going to block that run. He was just going to get to my outside and then I was gonna be stuck in the middle three-wide. All in all, it was a good day. We needed a good run. We’ve had a string of just average finishes, so it’s nice to get a top-five and run up front and finish really well for the Fords and get a Ford Mustang to victory lane. I just wish it was my Ford Mustang, and I wish we could have won for all of the people who entered to win a million slices of Smithfield bacon.”

Next Up:
The next event on the Monster Energy NASCAR Cup Series schedule is the Hollywood Casino 400 on Sunday, Oct. 20 at Kansas Speedway in Kansas City It is the sixth race of the 10-race playoffs and the final race in the Round of 12. It starts at 2:30 p.m. EDT with live coverage provided by NBC and SiriusXM NASCAR Radio.