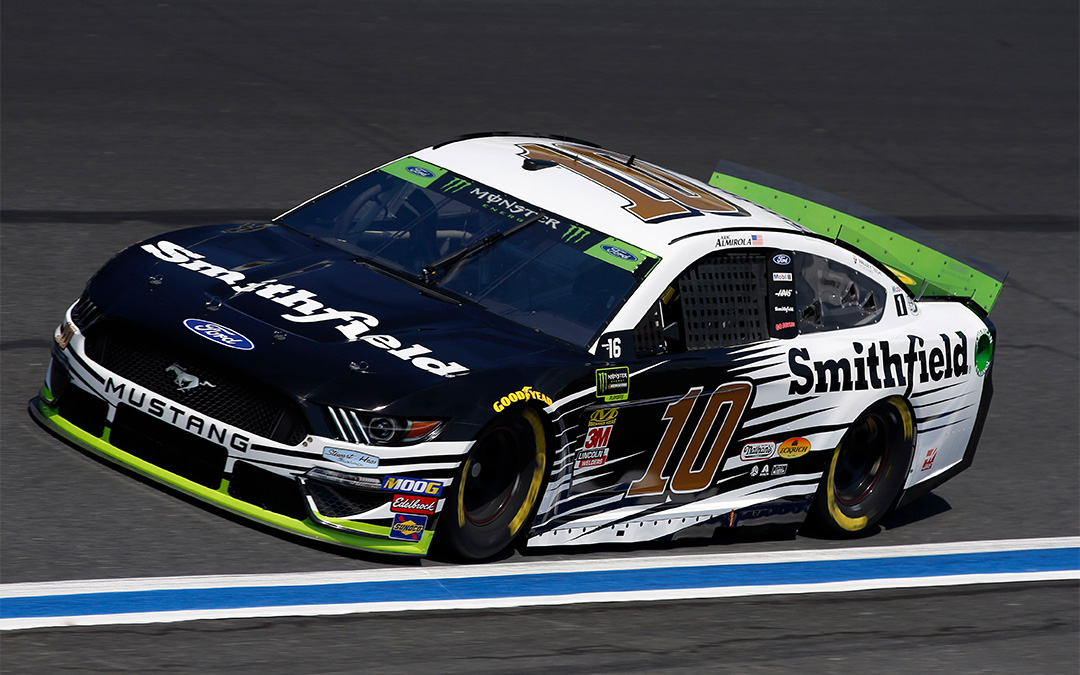 KANNAPOLIS, N.C. (Oct. 10, 2019) – Stewart-Haas Racing (SHR) has renewed its partnership with Smithfield Foods, Inc., maintaining Smithfield’s status as the lead brand on the No. 10 Ford Mustang driven by Aric Almirola in the NASCAR Cup Series.

Smithfield, the leading provider of high-quality pork products, joined SHR in 2018, along with Almirola. The 35-year-old from Tampa, Florida, has represented Smithfield since 2012, his first full season in the elite NASCAR Cup Series. The 2020 season will mark Almirola’s ninth full season in the NASCAR Cup Series and third with SHR. Almirola has made the NASCAR Playoffs in each of his two seasons with SHR.

“The Smithfield brand has enjoyed great success with Aric Almirola and Stewart-Haas Racing,” said Michael Merritt, Senior Marketing Director for Smithfield Foods. “It’s a true partnership that performs on the racetrack, with retailers and our consumers. Aric resonates well with them because he’s genuine and, overall, a great ambassador for the company. He has worked incredibly hard to get to where he is today and we’ve been a part of that journey for nearly a decade, and the payoff from all that hard work has been amplified by Stewart-Haas Racing.”

Almirola had a career year in 2018 with four top-five and 17 top-10 finishes, highlighted by a victory Oct. 14 at Talladega (Ala.) Superspeedway. Almirola qualified for the NASCAR Playoffs for the second time in his career and advanced into the Round of 8, just missing the Championship 4 cutoff. He ended the season fifth in the championship standings to earn the best points finish of his career.

“I said when I first came to Stewart-Haas Racing that this is the opportunity every driver wants, and I’m obviously very proud to have it continue,” said Almirola, who in less than two seasons at SHR has scored more top-10 finishes (27) than in his five previous seasons (2013-2017) combined. “Our relationship with Smithfield is strong. From the customers, to the retailers and all of the employees, we take a tremendous amount of pride in representing the Smithfield brand. They’re our biggest supporters and it’s what drives us every time we hit the racetrack.”

“Aric is one of the most focused and determined drivers I’ve ever met, and he’s got the skills to match,” said Tony Stewart, who co-owns SHR with Haas Automation founder Gene Haas. “He’s taken the opportunity here at SHR and seized it. Keeping him as the driver of the No. 10 Smithfield Ford Mustang was a priority and we’re very happy to have it continue.”

Those wanting to see how Almirola and the No. 10 Smithfield team operate can do so by subscribing to Beyond the 10 on YouTube. Episodes showcase behind-the-scenes footage of Almirola at the track, with his family and what a day in the life of a racer, husband and father looks like. Click here to subscribe and view the latest episode.

About Smithfield:
A leading provider of high-quality pork products, Smithfield was founded in 1936 in Smithfield, Virginia, establishing the town as the “Ham Capital of the World.” From hand-trimmed bacon and slow-smoked holiday hams to marinated tenderloins, Smithfield brings artistry, authenticity and a commitment to heritage, flavor and handcrafted excellence to everything it produces. With a vast product portfolio including smoked meats, hams, bacon, sausage, ribs and a wide variety of fresh pork cuts, the company services retail, foodservice and deli channels across the United States and 30 countries abroad. All of Smithfield’s products meet the highest quality and safety standards in the industry. To learn more about how Flavor Hails from Smithfield, please visit www.Smithfield.com, www.Twitter.com/SmithfieldBrand, and www.Facebook.com/CookingWithSmithfield. Smithfield is a brand of Smithfield Foods.