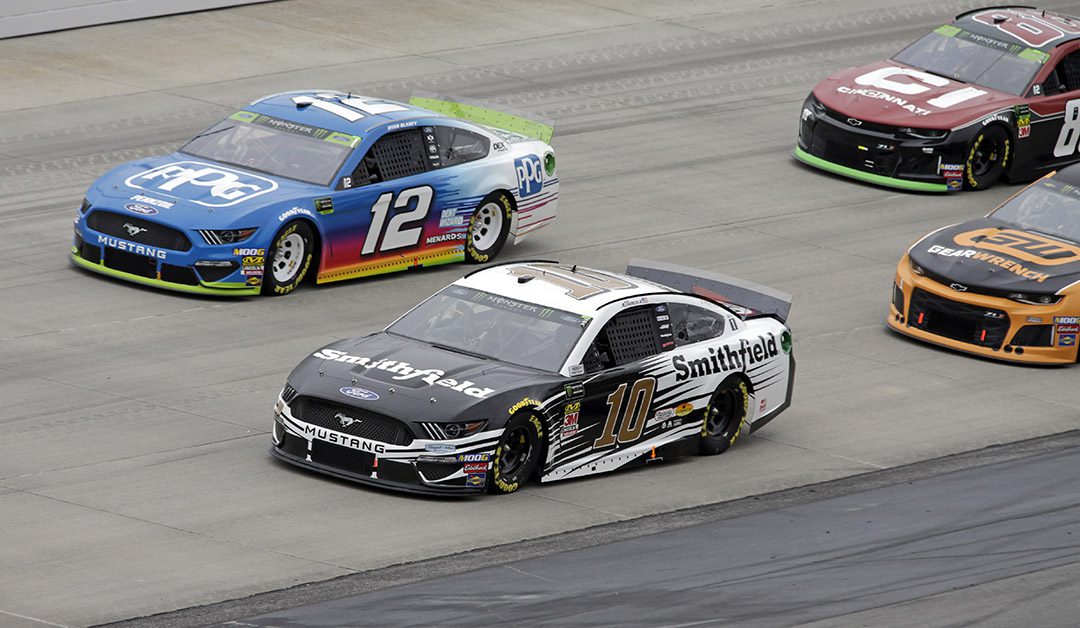 Stage 1 Recap (Laps 1-120):
● Aric Almirola started seventh and finished 22nd.
● The Smithfield Ford driver made his way to sixth by lap nine when the first caution flag flew.
● Almirola noted his handling was tight but a little loose just past the center and he got free when he got close to the other cars.
● He was running eighth when he brought the Smithfield Ford down pit road for a green-flag pit stop. The crew put on four fresh tires, added fuel and made an air pressure adjustment.
● Almirola was assessed a pass-through penalty for speeding on pit road, which put him a lap down to the leaders.
● On lap 99, the Smithfield Ford was running 22nd, one lap down, and remained there to finish the stage.
● At the end of the stage, Almirola pitted for four tires, fuel and air pressure and wedge adjustments.

Final Stage Recap (Laps 241-400):
● Almirola started 18th and finished 17th.
● The No. 10 Smithfield Ford was scored 18th by lap 260.
● Crew chief Johnny Klausmeier asked Almirola how the balance of the Smithfield Ford was on lap 308. Almirola reported it was tight, but he had advanced to 17th.
● Five laps later, Almirola wheeled the No. 10 Ford down pit road for four tires, fuel and an adjustment. When green-flag pit stops cycled through, Almirola was 16th.
● With 43 laps remaining Almirola remained in the 16th position.
● Almirola finished 17th.

Notes:
● Kyle Larson won the Dover 400 to score his sixth career Monster Energy NASCAR Cup Series victory, his first of the season and his first at Dover. His margin of victory over second-place Martin Truex Jr. was 1.578 seconds.
● There were three caution periods for a total of 17 laps.
● Only eight of the 38 drivers in the Dover 400 finished on the lead lap.

“Had a good car today, just had some unfortunate events and a tight-handling Smithfield Ford. We’ll get them next week at Talladega. Looking forward to returning to where we won last fall.”

The next event on the Monster Energy NASCAR Cup Series schedule is the 1000Bulbs.com 500 on Sunday, Oct. 13 at Talladega (Ala.) Superspeedway. It is the fifth race of the 10-race playoffs and the second race in the Round of 12. It starts at 2 p.m. EDT with live coverage provided by NBC and SiriusXM NASCAR Radio.