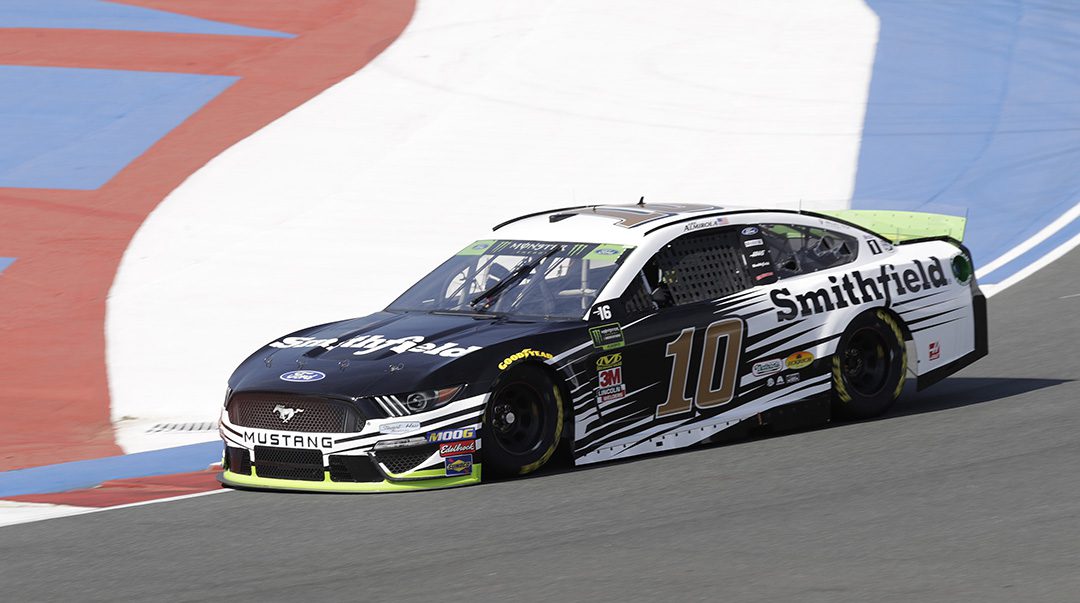 Stage 1 Recap (Laps 1-25):
● Aric Almirola started 16th and finished seventh to earn four bonus points.
● The Smithfield Ford driver made his way to 13th by lap three.
● Almirola noted his handling was tight in the turns and needed help with drive off of the turns on lap 19.
● He decided to stay out of the pits under caution on lap 20.
● Almirola restarted seventh and remained there through the end of the stage, which finished under caution.
● At the end of the stage, he pitted for four tires, fuel and chassis adjustments.

Stage 2 Recap (Laps 26-50):
● Almirola started 25th and finished 11th.
● He raced the No. 10 Ford Mustang to 14th place by lap 39.
● Under caution on lap 41, Almirola said the balance improved. He pitted for four tires, fuel and adjustments and returned to the track in 12th.
● He rejoined the top-10 on lap 45 but fell a spot before the stage ended. He stayed out of the pits at the conclusion of ths stage.

Final Stage Recap (Laps 51-109):
● Almirola started ninth and finished 14th.
● The No. 10 Smithfield Ford was scored seventh by lap 65.
● Crew chief Johnny Klausmeier called Almirola to the pits on lap 76 for four tires and fuel.
● After pit stops cycled through he was scored in seventh place, seven points ahead of the cutoff line for the Round of 12.
● During a lap-89 caution, the team stayed on track, projecting that the No. 10’s lap times were good enough to keep it up front.
● After the restart, Almirola got loose and lost multiple positions.
● Almirola pitted under caution on lap 95 for fuel and four fresh tires to improve grip.
● On lap 99, he was 11 points behind the cutoff and needed to gain 12 positions.
● He battled the No. 6 car for position on the final laps and was able to make the pass. Unfortunately, the No. 88 car advanced to second place and left Almirola five points behind the cutoff for advancing to the Round of 12.

Notes:
● Almirola earned his 19th top-15 of the season and his first top-15 in two career Monster Energy NASCAR Cup Series starts at the Roval.
● Almirola’s 14th-place result bettered his previous best finish at the Roval, which was 19th, earned last September.
● This is Almirola’s fifth straight top-20. He finished 16th in the series’ last race at Richmond.
● Chase Elliott won the Bank of America Roval 400 to score his sixth career Monster Energy NASCAR Cup Series victory, his third of the season and his first at the Roval. His margin of victory over second-place Alex Bowman was 3.024 seconds.
● There were 10 caution periods for a total of 23 laps.
● Thirty-three of the 40 drivers in the Bank of America Roval 400 finished on the lead lap.

Aric Almirola, Driver of the No. 10 Smithfield Ford Mustang for Stewart-Haas Racing:
“I’m disappointed. It didn’t work out the way that I wanted it to, but I’m still really blessed and fortunate to have this opportunity. So many people put a lot behind me. Everybody at Stewart-Haas Racing, Smithfield, Ford Motor Company, Go Bowling, Valley Tech, Mobil 1, Roush Yates and 3D Systems. It stings, but the sun is going to come up tomorrow. I’ll still be Aric Almirola and I’ll still be a husband and a father. They’re not gonna take my birthday away so, as disappointing as it is, it’s not the end of the world. We’ll move on to Dover next week and continue to fight and battle. It’s still really achievable to go and finish fifth in the points. We did that last year and we can go have some good runs, but most importantly we just need to continue to build for next year. Off the top of my head I can’t help but think about 2017. The 22 car missed the playoffs and then comes back the very next year and wins the championship. We can’t let this define us. Last year, it seemed like everything kind of came relatively easy for a new race team and me being new to the organization to go on the run that we had last year and finish fifth in the points. We’ll continue to build and sometimes you go through adversity and it makes you better and stronger.”

Next Up:
The next event on the Monster Energy NASCAR Cup Series schedule is the Dover 400 on Sunday, Oct. 6 at Dover (Del.) International Speedway. It is the fourth race of the 10-race playoffs and the first race in the Round of 12. It starts at 2:30 p.m. EDT with live coverage provided by NBCSN and SiriusXM NASCAR Radio.