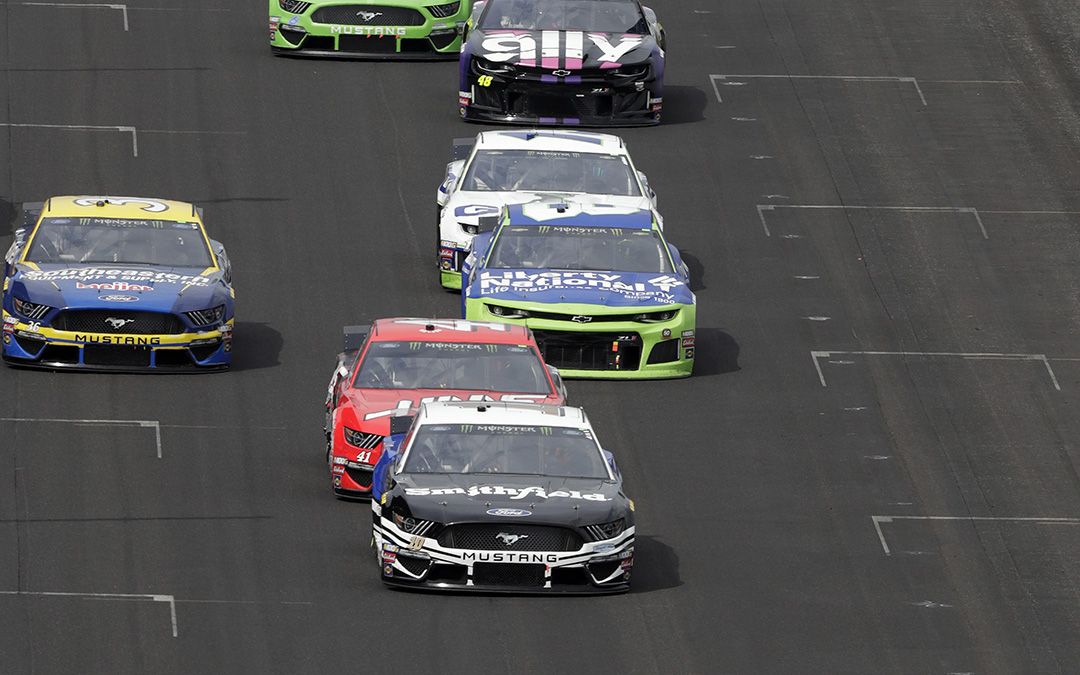 Stage 1 Recap (Laps 1-50):
● Aric Almirola started 10th and finished 15th.
● On lap five, the Smithfield/Meijer Ford driver reported loose-handling conditions while running inside the top-10.
● He pitted under caution on lap 12 for two fresh tires, fuel and wedge adjustments, then restarted 11th.
● By lap 21, Almirola piloted the No. 10 Ford to ninth place.
● Later in the run, the car drove tighter into the turns, and Almirola radioed a vibration issue.
● He pitted again under caution on lap 42 for four tires, fuel and chassis adjustments, and came off pit road in 12th place.
● The stage ended under caution due to a two-car wreck on lap 49.

Stage 2 Recap (Laps 51-100):
● Almirola started 11th and finished 10th to earn one bonus point.
● The No. 10 Smithfield/Meijer Ford driver said the balance was free into the turns and tight on the exit at the beginning of Stage 2.
● He ran inside the top-10 for the majority of the stage.
● Almirola pitted under green on lap 85 for four tires, fuel and adjustments.
● A caution for a fire on pit road was called on lap 88.
● He restarted 10th with six laps to go in Stage 2.
● The stage finished under a caution for debris, and Almirola pitted the Smithfield/Meijer Ford for four tires, fuel and adjustments.

Final Stage Recap (Laps 101-160):
● Almirola started 10th and finished 14th.
● He avoided a multicar accident on lap 105 that took place directly in front of him.
● Almirola raced the Smithfield/Meijer Ford as high as fifth place in the final stage.
● The No. 10 driver pitted on lap 129 under caution for four tires, fuel and more adjustments to fix the balance. During that pit stop he fell back to 10th place.
● On the restart, Almirola was caught in traffic and fell to 16th, but he quickly powered past four drivers and back to 12th place before a caution on lap 147.
● He opted to stay out of the pits, raced inside the top-15 on the final green-flag run and finished 14th.

Notes:
● Almirola qualified for the playoffs by virtue of his 13th-place finish in the regular-season standings.
● Almirola takes one bonus point into the playoffs via his stage win at New Hampshire Motor Speedway in Loudon.
● This is Almirola’s third playoff appearance and his second in a row. His first came in 2014.
● Almirola earned his 17th top-15 of the season and his second in eight career Monster Energy NASCAR Cup Series starts at Indianapolis.
● Race winner Kevin Harvick’s margin of victory over second-place Joey Logano was 6.118 seconds.
● There were nine caution periods for a total of 48 laps.
● Only 23 of the 40 drivers in the Brickyard 400 finished on the lead lap.
● Kyle Busch won the Monster Energy NASCAR Cup Series regular season championship.

Aric Almirola, Driver of the No. 10 Smithfield/Meijer Ford Mustang for Stewart-Haas Racing:

Next Up:
The next event on the Monster Energy NASCAR Cup Series schedule is the South Point 400 on Sunday, Sept. 15 at Las Vegas Motor Speedway. The race, the first in the 10-race playoffs, starts at 7 p.m. EDT with live coverage provided by NBCSN and SiriusXM NASCAR Radio.