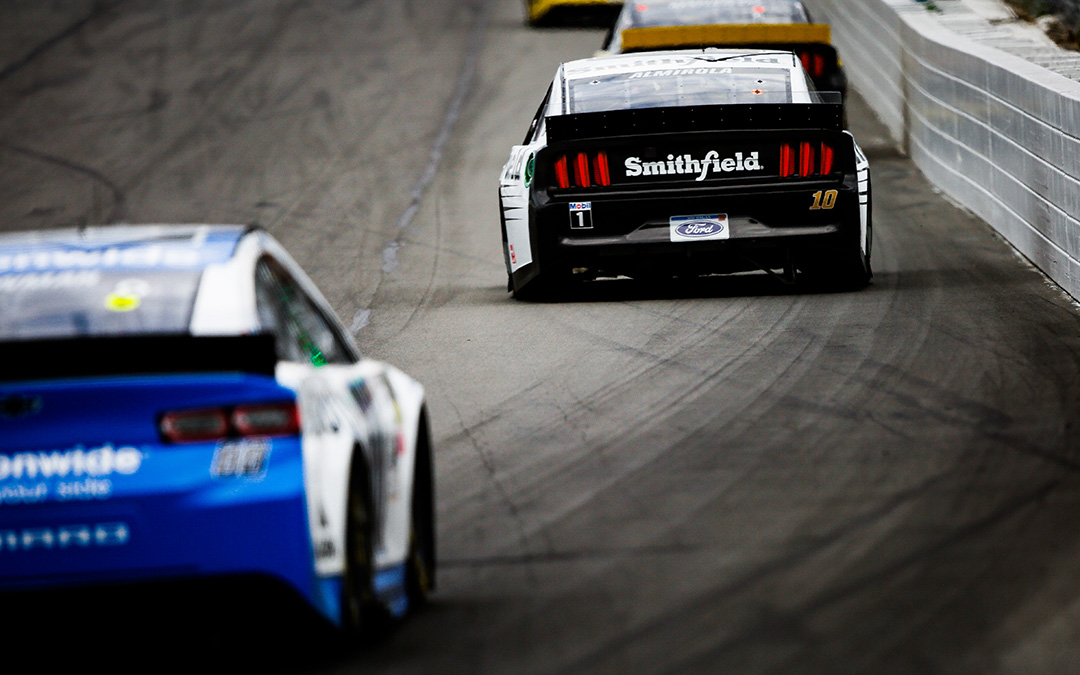 Stage 1 Recap (Laps 1-50):
● Aric Almirola started third and finished eighth, earning three bonus points.
● The Smithfield Ford driver was caught in traffic when the green flag waved to begin the race, dropping him to seventh place.
● After green-flag pit stops he was scored third but noted tight-handling conditions.
● He pitted on lap 38 for fuel and chassis adjustments and returned to the track in seventh.
● At the conclusion of the stage he pitted for four fresh tires, fuel and air pressure adjustments.

Stage 2 Recap (Laps 51-100):
● Started 20th and finished 20th.
● Almirola drove the Smithfield Ford Mustang back to 12th place by lap 68.
● He pitted under caution for four tires, fuel and adjustments to restart 15th.
● The caution was called on lap 92 for inclement weather, but racing soon resumed.
● Almirola avoided an accident during the restart before the caution was called on lap 98. He pitted at the end of the stage for four tires, fuel and air pressure adjustments.

Final Stage Recap (Laps 101-163):
● Started 20th and finished 12th.
● He piloted the No. 10 Ford to 15th before a caution on lap 113. During that caution period he pitted for two tires and fuel.
● Almirola advanced to 12th by lap 140.
● Crew chief Johnny Klausmeier radioed Almirola to save fuel on lap 143.
● He opted not to pit on lap 153 under caution to hold his 11th-place spot.
● The yellow flag flew yet again on lap 156, forcing the race into overtime.
● When the green flag waved for the two-lap overtime shootout, Almirola drove the Smithfield Ford just outside the top-10.

Notes:
● Almirola earned his 14th top-12 of the season and his third top-12 in 15 career Monster Energy NASCAR Cup Series starts at Pocono.
● This is Almirola’s fourth straight top-15. He finished 11th in the series’ previous race at New Hampshire Motor Speedway in Loudon.
● Denny Hamlin won the Gander RV 400to score his 34th career Monster Energy NASCAR Cup Series victory, his third of the season and his fifth at Pocono. His margin of victory over second-place Erik Jones was .341 of a second.
● There were seven caution periods for a total of 24 laps.
● Only 25 of the 38 drivers in the Gander RV 400 finished on the lead lap.
● Joey Logano remains the championship leader after Pocono with a six-point advantage over second-place Kyle Busch.

The next event on the Monster Energy NASCAR Cup Series schedule is the Go Bowling at The Glen on Sunday, Aug. 4 at Watkins Glen (NY) International. The race starts at 3 p.m. EDT with live coverage provided by NBCSN and SiriusXM NASCAR Radio.