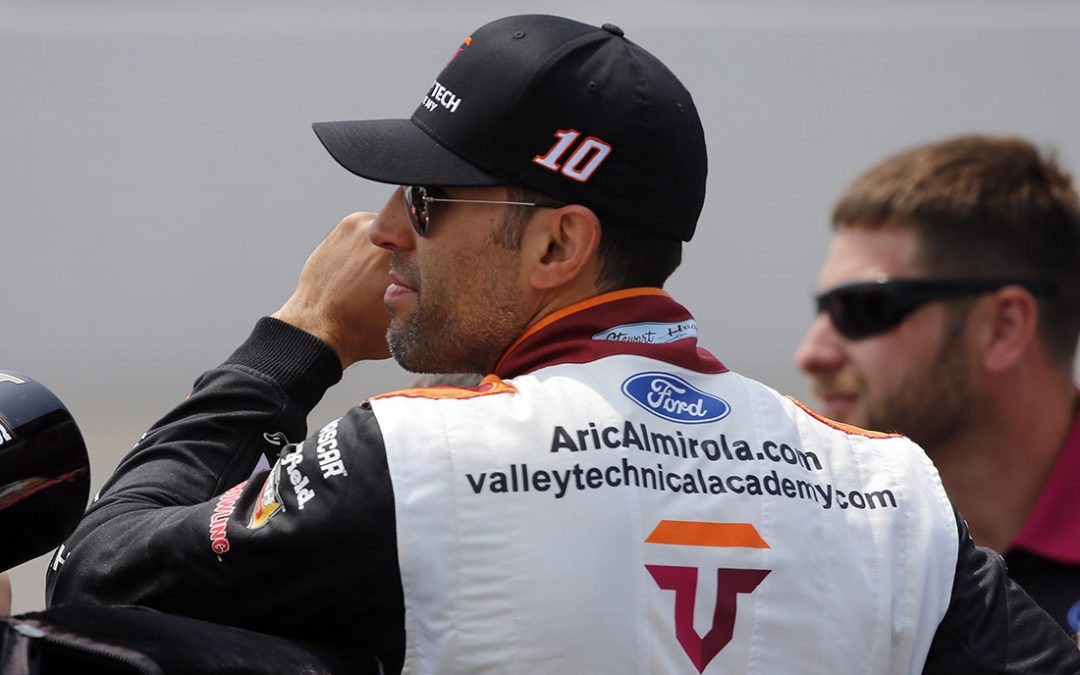 Stage 1 Recap (Laps 1-50):
● Aric Almirola started 13th, finished fifth and earned six bonus points.
● Almirola fought tight conditions early on in the Valley Tech Ford Mustang, dropping to 14th by lap eight.
● The competition caution flew on lap 20, and Almirola brought the No. 10 down pit road for four tires, fuel and an adjustment.
● Almirola cracked the top-10 by lap 26, where he stayed for the remainder of Stage 1.
● The Valley Tech Ford Mustang finished the first stage in the fifth position, and Almirola reported that the car was “overall better, needs more turn.”
● At the conclusion of the stage, he pitted the No. 10 Ford for four tires and fuel.

Stage 2 Recap (Laps 51-100):
● Started 14th, finished 22nd.
● Almirola battled his way up to 12th after two cautions in the first 10 laps of the second stage.
● The No. 10 Ford Mustang jumped back up to 10th by lap 66.
● After hitting the outside wall while running 10th on lap 80, Almirola brought the Valley Tech Ford Mustang down pit road for four fresh Goodyear tires and fuel.
● Almirola returned to the track in the 30th position, one lap down.
● He finished Stage 2 in the 22nd position, back on the lead lap. At the end of Stage 2 he pitted for four tires, fuel and fixed damage to the right rear.

Stage 3 Recap (Laps 100-160):
● Started 21st, finished 10th.
● Almirola maneuvered the No. 10 Valley Teach Ford Mustang up to 13th after restarting the final stage 21st.
● On lap 122, Almirola made his way back to the top-10 during green-flag pit stops before bringing the No. 10 Ford Mustang down pit road for two tires and fuel.
● A late-race caution on lap 145 brought Almirola back down pit road for four tires and fuel before he headed back out to the track 16th. He quickly battled back to get into the top-10 on lap 156.
● Almirola piloted the No. 10 Valley Tech Ford Mustang to a 10th-place finish.

● Almirola earned his eighth top-10 of the season and his second top-10 in 14 career Monster Energy NASCAR Cup Series starts at Pocono.
● Almirola finished fifth in Stage 1 to earn six bonus points.
● Kyle Busch won the Pocono 400 to score his 55th career Monster Energy NASCAR Cup Series victory, his series-leading fourth of the season and his third at Pocono. His margin of victory over second-place Brad Keselowski was 2.224 seconds.
● There were eight caution periods for a total of 28 laps.
● Twenty-one of the 37 drivers in the Pocono 400 finished on the lead lap.
● Busch leaves Pocono as the sole championship leader with a four-point advantage over second-place Joey Logano. The duo came into the Pocono 400 tied atop the championship standings.

Aric Almirola, Driver of the No. 10 Valley Tech Ford Mustang:
“Our car was decent and we were pretty competitive, we just fought track position. I got up to fifth or sixth there and just barely brushed the wall off turn three and had bad tire smoke and had to come pit so that I didn’t blow a right rear tire and end our day. I erred on the side of caution there, and then we just fought to recover from that the rest of the day. We were buried in traffic and had to be aggressive on restarts to try to get back up through the field.”

Next Up:
The next event on the Monster Energy NASCAR Cup Series schedule is the FireKeepers Casino 400 on Sunday, June 9 at Michigan International Speedway in Brooklyn. The race starts at 2 p.m. EDT with live coverage provided by FS1 and SiriusXM NASCAR Radio.