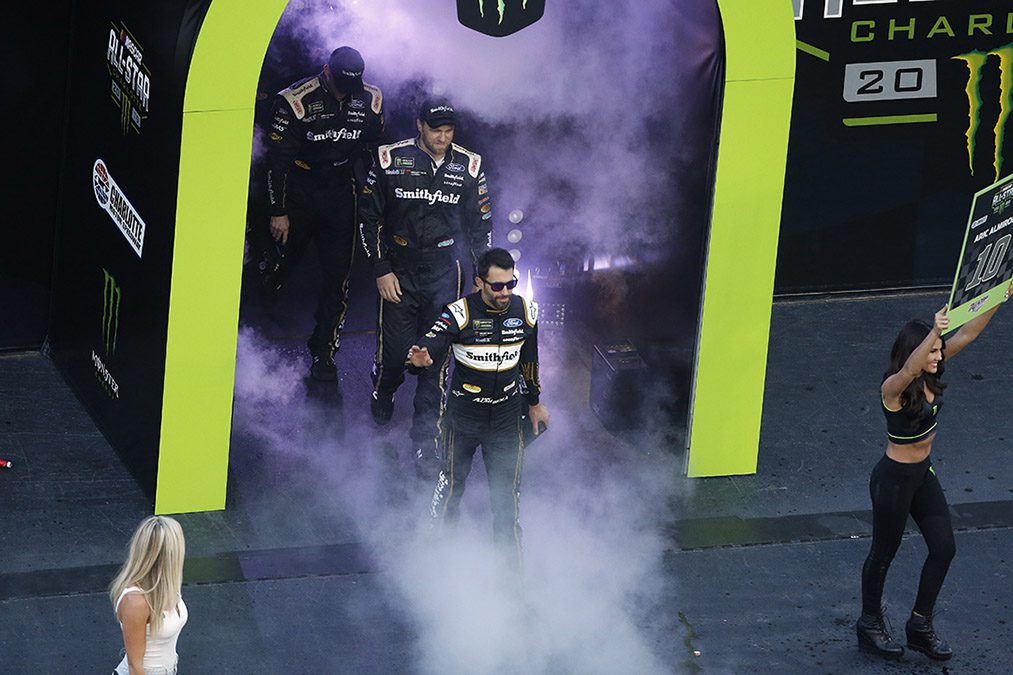 Stage 1 Recap (Laps 1-30):
● Started 13th, finished 19th.
● Almirola reported on lap one that the Smithfield Mustang was too loose all around.
● On lap 10 and running in the 17th position, Almirola said he was “still loose but was on the splitter some” as he began to work his way back through the field.
● Almirola reached the top-15 just before the first caution of the race on lap 28.
● He pitted on lap 29 for four tires, fuel and adjustments and exited the pits in the 11th position for the lap-31 restart.
● As the field was approaching the end of Stage 1, Almirola said he had a loose wheel that felt as though it was about to fall off. He was able to stay on track.
● At the stage break, Almirola pitted for fuel and to tighten the loose left rear wheel.

Stage 2 Recap (Laps 31-50):
● Started 19th, finished 12th.
● After an early caution in Stage 2 on lap 37, Almirola began to work his way back toward the front and claimed the 11th position on lap 44.
● With four laps remaining in Stage 2, Almirola radioed that the Smithfield Ford wouldn’t turn and he had lost rear lateral.
● At the end of Stage 2, Almirola pitted on lap 53 for four tires, fuel and a chassis adjustment to help the Smithfield Mustang turn in the corner.

Stage 3 Recap (Laps 51-70):
● Started 12th, finished 17th.
● The Smithfield team maintained position after the pit stop to restart 12th.
● During the fourth caution on 58, Almirola stayed on track but told the team he was having a hard time gaining momentum on restart.
● After going back green on lap 62, the No. 10 was caught in a three-wide battle for the 10th position and sustained left-side damage, causing Almirola to lose the handling in the Smithfield machine.
● Almirola fell back to 17th but was again able to continue until the end of Stage 3 to pit under caution.
● On lap 73, Almirola brought the Smithfield Ford to pit road under caution for four tires and repairs. He returned to the track in the 17th position, but the team received a penalty for too many crew members over the wall, which pushed them back to 19th for the restart.

Final Stage Recap (Laps 71-85):
● Started 19th, finished sixth.
● There were three cautions to start the final stage of the 2019 All-Star Race, preventing Almirola from gaining much ground from the 19th position.
● When the race returned to green for the final 12 laps, Almirola quickly advanced into the top-10 and gained at least one position each lap.
● On lap 82, Almirola took over the sixth position and tracked down Joey Logano for fifth. He briefly moved into the top-five but settled back into sixth after a charge from the No. 22.
● Almirola held the sixth position until the completion of the race to earn his best career finish in the All-Star Race.

Aric Almirola, Driver of the No. 10 Smithfield Ford Mustang:
“You have to be super aggressive in this race if you want to be up front competing for the money at the end of it. You can’t really pass after it gets strung out so, you’ve got two or three laps to be as aggressive as you possibly can be. If you check out of the throttle for the slightest little bit, they go by you three- and four-wide. It’s all about momentum and being in the right lane on the restarts. Everything is situational if a guy in front of you wiggles and checks up, and you check up to keep from running over him. You lose four, five, six spots in one straightaway. It’s aggravating, but that’s the way it is when you don’t have a lot of horsepower, it becomes all about momentum.”

Next Up:
The Monster Energy NASCAR Cup Series returns to points-paying racing on Sunday, May 26 with the Coca-Cola 600 at Charlotte. The longest race on the Cup Series schedule gets underway at 6 p.m. EDT with live coverage provided by FOX and SiriusXM NASCAR Radio.