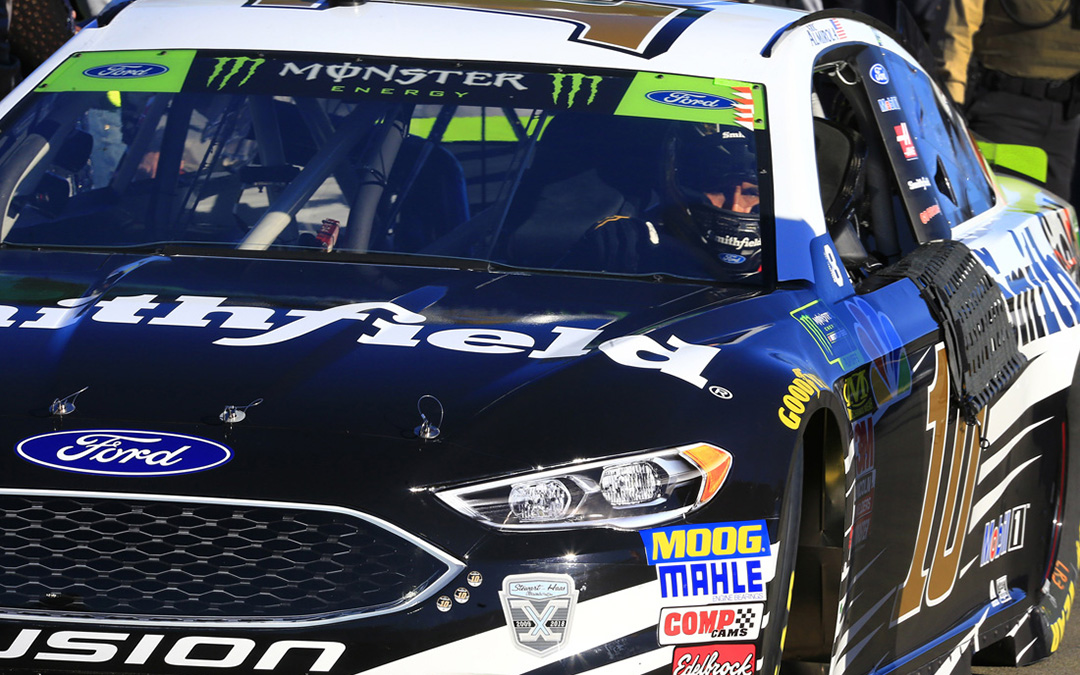 Smithfield Ford Driver Continues in Playoffs’ Round of 8

Stage 1 Recap (Laps 1-130):
● Aric Almirola began Stage 1 in fifth and finished it in the 10th position.
● Almirola moved up to fourth shortly after the green flag and remained there until the first caution.
● He pitted during the lap-44 caution for fuel and four tires after reporting the Smithfield Ford Fusion was “a little too tight rolling.” He restarted sixth on lap 49.
● When the second caution of the race came out on lap 71, Almirola stayed out on the track in the eighth position.
● The remainder of the stage stayed green, and Almirola finished it in 10th.
● During the Stage 1 break the Tampa native pitted for fuel, four tires and adjustments and started Stage 2 in the 11th spot.

Stage 2 Recap (Laps 131-260):
● Almirola started Stage 2 in 11th and ended it in 12th.
● The entire stage ran under the green flag, and Almirola remained in the top-13 even though he was looking for more drive off.
● Almirola visited pit road during the Stage 2 break for fuel, four tires and adjustments and came out 11th.

Final Stage Recap (Laps 261-500):
● Almirola started the final stage 11th and ended it in the 11th position.
● With the adjustments Almirola received during the Stage 2 break, the 34-year-old’s car began making up ground.
● Almirola maneuvered past his competitors and reached the sixth position by lap 335.
● The third caution of the race came out on lap 367, and Almirola pitted for fuel, four tires and a slight adjustment. He restarted fourth on lap 373.
● Unfortunately, the handling of Almirola’s car turned extremely loose and he slipped back to the ninth position before the next caution on lap 383. He pitted on lap 390 and restarted in the 11th spot.
● Just a few laps after the green flag, the caution was displayed again, but Almirola stayed out in the Smithfield Ford to restart 11th on lap 414.
● Almirola’s teammate, Clint Bowyer, went for a spin on lap 457 to bring out another caution. The Ford driver visited pit road for service after he dropped back to 12th because his car was so loose. He restarted 11th on lap 463 and remained there until the finish.

Notes:
● This was Almirola’s 24th top-15 of 2018 and his seventh top-15 in 20 career Monster Energy NASCAR Cup Series starts at Martinsville.
● Almirola finished 10th in Stage 1 to earn one bonus point.
● Joey Logano won the First Data 500 to score his 20th career Monster Energy NASCAR Cup Series victory, his second of the season and his first at Martinsville. His margin of victory over second-place Denny Hamlin was .107 of a second.
● There were eight caution periods for a total of 68 laps.
● Twenty of the 40 drivers in the First Data 500 finished on the lead lap.

“We just missed it today. The car was just off. We had one run where we made an adjustment and put on a set of tires, and the car was really fast. We drove from 15th up to fifth, and I thought we had a really good shot there. We only made one more minor tweak, and the car just lost its handle again. I don’t know; I am just frustrated. I thought we had a really good Smithfield Ford Fusion going into today and thought we could capitalize on an opportunity here at Martinsville. For whatever reason all of our cars were off a little bit. We didn’t have the speed and grip that we had here in the spring race.”

Next Up:
The next event on the Monster Energy NASCAR Cup Series schedule is the AAA Texas 500 on Sunday, Nov. 4 at Texas Motor Speedway in Fort Worth. It is the eighth race of the 10-race playoffs and the second race in the Round of 8. It starts at 3 p.m. EST with live coverage on NBCSN.