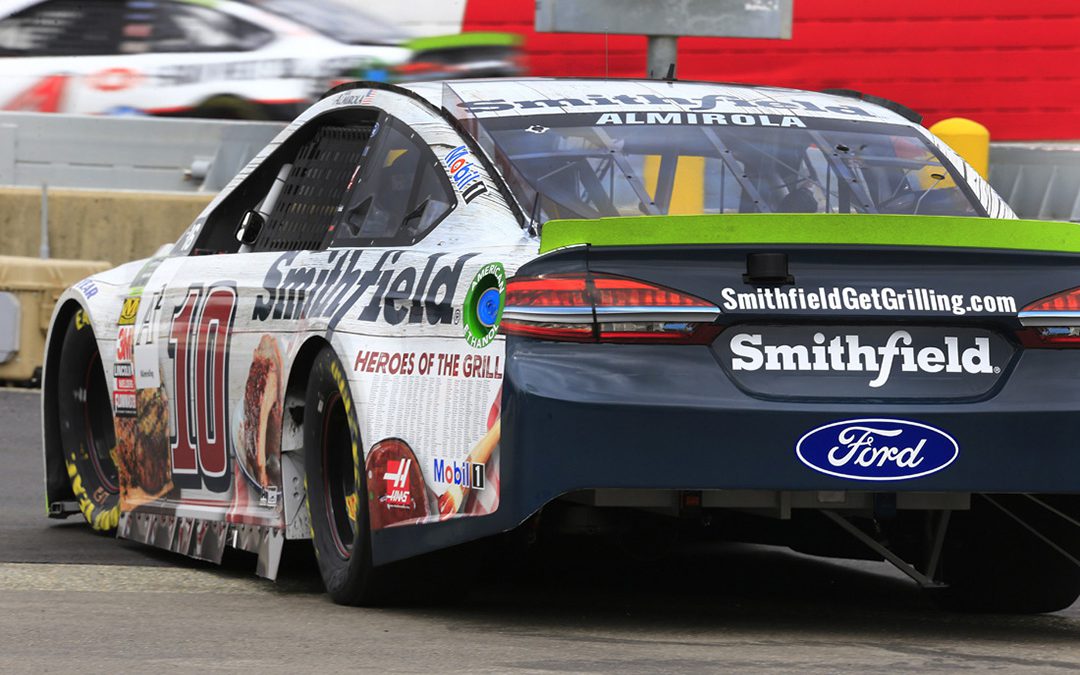 Stage 1 Recap (Laps 1-100):
● Aric Almirola started sixth and finished Stage 1 in sixth to earn five bonus points.
● Almirola slipped back a couple of spots on the restart but eventually worked his way into the top-five around the halfway point of the stage.
● The Tampa native reported his Smithfield Get Grilling Ford was “really, really tight in the middle” as the stage began to wind down.
● In the closing laps of the stage, the 34-year-old was in the sixth position. He pitted for fuel, four tires and adjustments during the break, and a speedy stop by his crew gained Almirola two positions.

Stage 2 Recap (Laps 101-200):
● Almirola started Stage 2 in fourth and concluded it in third to amass eight bonus points.
● Just after the green flag dropped on Stage 2, Almirola moved up to the third position, where he remained until the completion of the stage.
● During the stage break, Almirola relayed to the Smithfield Ford crew that his No. 10 machine drove better during the stage. He came in for fuel and four tires and exited pit road in fourth.

Final Stage Recap (Laps 201-400):
● Almirola started the final stage in the fourth position and ended it fifth.
● Almirola took over the third position shortly after the restart and then swapped positions for fourth with SHR teammate Kevin Harvick around lap 200.
● The Ford Fusion driver remained in the fourth position until lap 253.
● On lap 269, Almirola made a scheduled green-flag pit stop from the fifth position for fuel, four tires and adjustments. Ten laps later he took over the fourth position.
● At lap 293 Almirola slipped back to fifth after being passed by the No. 9, and he rode there until the first caution of the race was displayed on lap 327.
● Almirola pitted for fuel and four tires. He restarted fifth on lap 333 and on the next lap moved into fourth. He remained in the top-five for the rest of the evening, finishing fifth.

Notes:
● This was Almirola’s second top-five finish of 2018.
● Almirola earned his second top-five in 14 career Monster Energy NASCAR Cup Series starts at Richmond.
● Almirola finished sixth in Stage 1 to earn five bonus points, and third in Stage 2 to earn an additional eight bonus points.
● Almirola led once for one lap – his first at Richmond.
● Kyle Busch won the Federated Auto Parts 400 to score his 50th career Monster Energy NASCAR Cup Series victory, his seventh of the season and his sixth at Richmond. His margin of victory over second-place Harvick was .777 of a second.
● There were three caution periods for a total of 23 laps.
● Only 13 of the 40 drivers in the Federated Auto Parts 400 finished on the lead lap.

“I just couldn’t quite get the Smithfield Ford Fusion to turn the way I needed to in order to make pace with the guys in front of me. I am so proud of these guys on the Smithfield team. Our Ford Fusion was fast, and we had a good night. We executed and ran top-five all night. That is the exact night we were looking for to build a little bit of a point cushion going into the roval next week where we are all unsure of what we will have. I am really proud of the night, and we will see what happens next week.”

The next event on the Monster Energy NASCAR Cup Series schedule is the Bank of America Roval 400 on Sunday, Sept. 30 at Charlotte (N.C.) Motor Speedway. It is the third race of the 10-race playoffs and the cutoff race for the Round of 12. It starts at 2 p.m. EDT with live coverage provided by NBC beginning at 1 p.m.