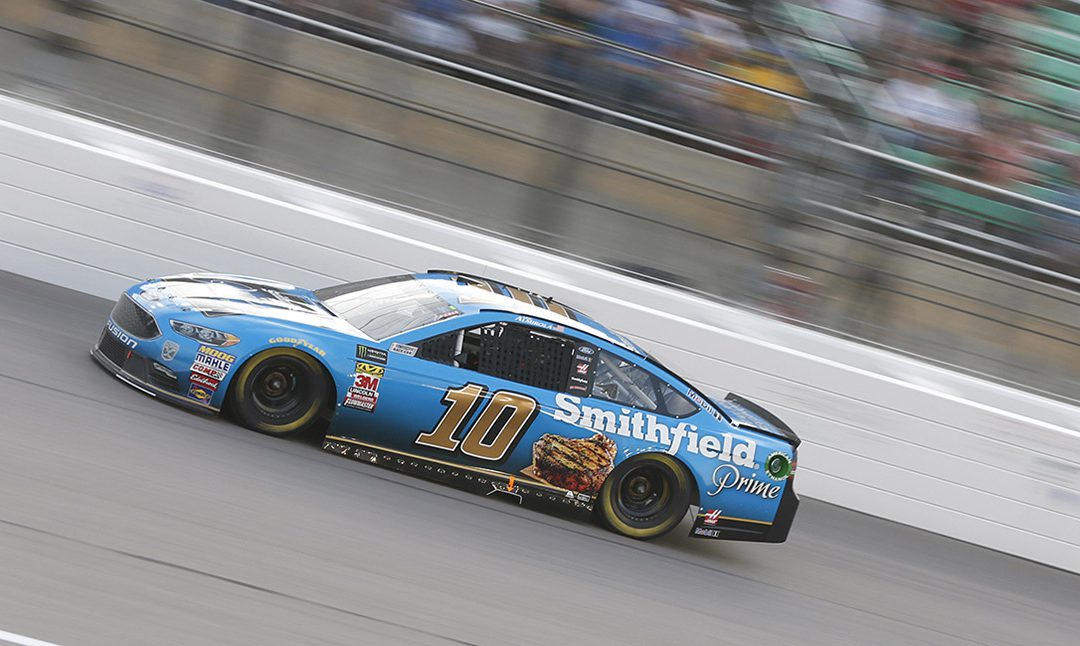 ● Aric Almirola started Stage 1 in the fourth position at Kansas Speedway, his best qualifying position of the season, and completed it in the sixth position.
● Almirola made his first pit stop of the evening from the sixth spot during the competition caution on lap 30. He received fuel and four fresh Goodyear tires after reporting the No. 10 Smithfield Prime Ford Fusion was neutral.
● The Tampa native restarted seventh on lap 35 and finished the first stage in the sixth spot to earn five bonus points.

● Before the start of Stage 2, Almirola visited pit road for four tires, fuel and an air pressure adjustment. He started the second stage in the sixth position and ended the stage in sixth to accumulate five bonus points.
● Almirola’s No. 10 Smithfield Prime Ford Fusion continued to maintain a top-10 running position.
● On lap 123 he made a scheduled green-flag pit stop for fuel and four tires after reporting the No. 10 Ford’s handling was tight.
● The 34-year-old maintained the seventh position for most of the stage but was able to gain one position as Stage 2 came to close.

● During the caution period for the final stage break, Almirola visited pit road for fuel, four tires and adjustments, and began the final stage from the sixth spot.
● On lap 213 Almirola made a scheduled green-flag pit stop from the seventh position for fuel, four tires and adjustments to help with the No. 10 machine’s handling.
● After the field cycled through green-flag pit stops, Almirola was running in the ninth position.
● During the fifth caution of the race, Almirola had to visit pit road twice and restarted in the 15th position on lap 252. Just after the restart the sixth caution came out for a multicar accident, and subsequently the red flag was displayed for approximately 13 minutes.
● After the red flag was lifted, Almirola restarted 11th on lap 258 and worked his way up to ninth, where he ultimately finished.

● This was Almirola’s fifth top-10 of 2018.
● Almirola earned his fifth top-10 in 13 career Cup Series starts at Kansas.
● Almirola finished sixth in Stage 1 to earn five bonus points and sixth in Stage 2 to earn an additional five bonus points.
● Harvick’s victory in the KC Masterpiece 400 marked the 49th overall win for Stewart-Haas Racing (SHR). It was the organization’s 45th points-paying Monster Energy NASCAR Cup Series win and its third at Kansas.
● Saturday’s win marked SHR’s sixth victory in the first 12 races of the 2018 season.
● This was SHR’s ninth Cup Series victory with Ford. The team won its first race with Ford when Kurt Busch captured the 2017 Daytona 500.
● Harvick’s margin of victory over second-place Martin Truex Jr., was .390 of a second.
● There were six caution periods for a total of 31 laps.
● Only 15 of the 38 drivers in the KC Masterpiece 400 finished on the lead lap.

Aric Almirola, driver of the No. 10 Smithfield Prime Ford Fusion for Stewart-Haas Racing:

“It was a good night. I’m glad that we keep scoring these top-10s. I’m really proud of everybody at Stewart-Haas Racing. We had a really good car tonight. I’m really proud of all the effort and the work that is going in. Obviously, congrats to my teammate Kevin Harvick. We continue to rack up wins at Stewart-Haas Racing, but tonight we definitely had a top-five car without a doubt. We had a car capable of running in the top-five and we just didn’t execute. We were a little behind on pit road, and we made a mistake there at the end of the race that really cost us and got us behind. I had one restart where I didn’t get a good launch and got put in the middle three-wide. We just didn’t execute properly, and at this level when you get up inside the top-10 if you want to go run top-five and you want to have a shot to win races, you’ve got to be perfect, you’ve got to do everything right. Unfortunately, we had a top-five car tonight, and we finished ninth.”