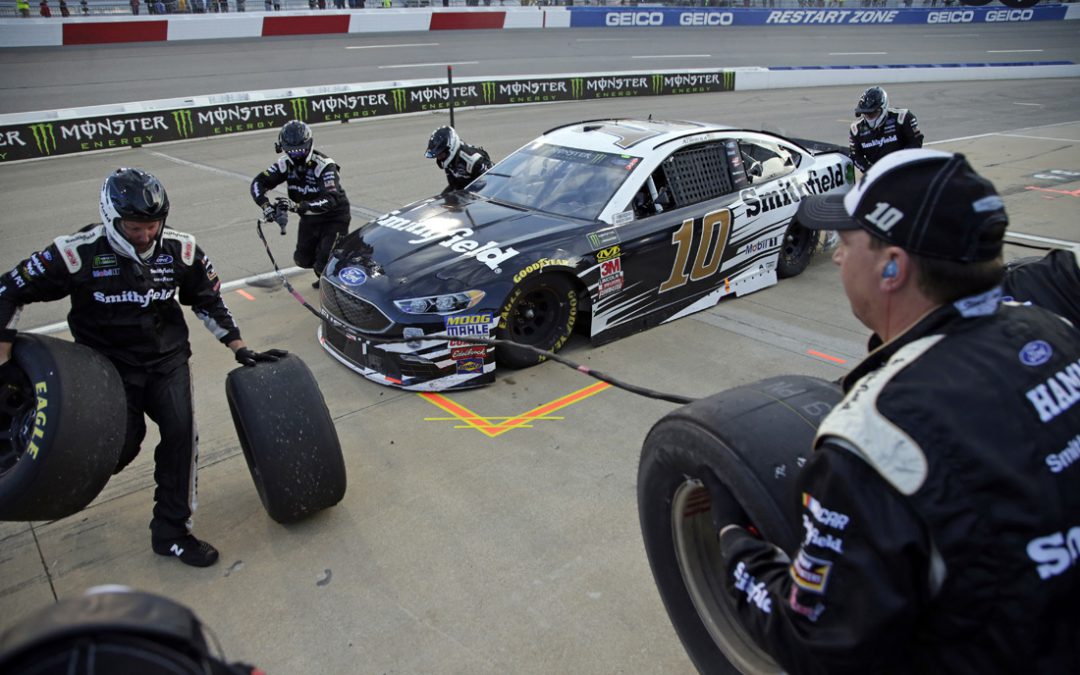 Stage 1 Recap (Laps 1-100):
● Aric Almirola started 25th and finished second to earn nine bonus points.
● Almirola climbed 24 positions in the No. 10 Smithfield Ford Fusion in Stage 1.
● Crew chief Johnny Klausmier told the team that the Smithfield Ford was the quickest car on the track by two-tenths of a second.
● The No. 10 pitted at the conclusion of the stage for four tires and fuel.

Stage 2 Recap (Laps 101-200):
● Started sixth and finished third to earn eight bonus points.
● Almirola fell to sixth place after the pit stop in Stage 1 but regained the top-five by lap 138, joining teammates Kurt Busch and Clint Bowyer.
● During the closing laps of Stage 2, Almirola made a clean pass on Busch for the third position and finished behind Bowyer.
● He noted loose-handling conditions on entry, tight to the middle and loose to the exit of the turns.
● The Smithfield Ford Fusion took four fresh tires, fuel and chassis adjustments at the end of the stage.

Final Stage Recap (Laps 201-400):
● Started fourth and finished 17th.
● Almirola continued to battle handing issues but held the Smithfield Ford inside the top-10.
● On lap 328 he pitted under green-flag conditions for four tires and fuel. He was scored in the ninth position when green-flag pit stops cycled through.
● After a lap-370 caution Almirola restarted in the ninth position, but he was caught in four-wide traffic and fell outside of the top-10.
● During the final restart with three laps to go, Almirola battled to keep his Smithfield Ford in and around the top-15 but did not have enough laps to climb back through the field.

Notes:
● Almirola earned a total of 17 bonus points.
● There were six caution periods for a total of 46 laps.
● Twenty-three of the 39 drivers in the Richmond 400 finished on the lead lap.
● Kyle Busch won the Richmond 400 to score his 46th career Cup Series victory, his third of the season and his fifth at Richmond. His margin of victory over second-place Chase Elliot was .511 of a second.

Aric Almirola, driver of the No. 10 Smithfield Ford Fusion for Stewart-Haas Racing:
“We fought hard all day up front and had a great car, but just couldn’t get the Smithfield Ford where we wanted it toward the end of the race. It’s tough when you have such a great car and worked so hard to finish where we did.”

Next Up:
The next event on the Monster Energy NASCAR Cup Series schedule is the Geico 500 on Sunday, April 29 at Talladega (Ala.) Superspeedway. The race starts at 2 p.m. EDT with live coverage provided by FOX TV, MRN and SiriusXM Radio.